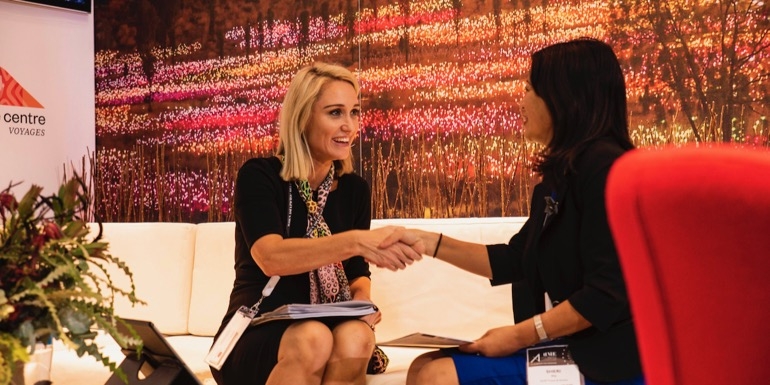 Face to face meetings are best

Asia Pacific Incentives and Meetings Event (AIME), the leading meetings and incentives event in the region, has unveiled a new report that shows 93 per cent of business event delegates find human interaction and connections important across business events, with 48 per cent declaring them to be critical.

The new study, conducted by Talk2 Media & Events in the lead-up to AIME 2020, surveyed over 200 buyers and exhibitors from across the Asia Pacific region (87%) and wider world (13%) – looking at industry challenges and the most valued attributes.

The study revealed that the biggest barriers to business when attending an industry trade show were lack of quality buyers and exhibitors (33%), followed by insufficient networking opportunities (24%), poorly organised appointments and meetings (20%), lack of educational opportunities (13%) and poor timing of the industry event (10%).

The study also found that over 60 per cent of buyers and exhibitors continue to find face-to-face connections the most effective way to conduct business, followed by email (32%) and phone call (4%).

Interestingly, when asked about the rise of digital in the industry, the two biggest concerns lay in losing touch with human relationships (48%), followed by online communities replacing physical communities (26%).

Matt Pearce, CEO of Talk2 Media & Events said, “This industry report provides real insight into what makes delegates tick – and is another way we’re continuing to listen to the community.

At AIME 2020, expect to be challenged both professionally and personally. We have sharpened our focus on creating more meaningful and human moments, with greater opportunities to drive positive business results.”

Furthermore, it was also revealed that the Asia Pacific region was critical (34%) to driving business growth, with 42% stating that the region had significant influence and only 16% stating it had partial influence.

Kick-starting the Business Events calendar year, AIME is scheduled to run in Melbourne 17–19 February 2020. With less than a month to go, visitaime.com.au for final registrations.

Tweet
More in this category: « Singapore to host inaugural Asia Pacific event A virtual taste of New Caledonia »
back to top