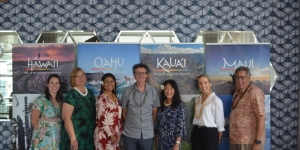 Many New Zealanders set off to Hawai’i last year, but few went beyond O’ahu.

The welcome 19 per cent increase in kiwi arrivals has been attributed to the many great deals that were in the market however, there was no flow-on effect to neighbouring islands which suffered a six per cent decrease in travellers from this market.

Hawaiian Tourism Oceania’s Megan Hornblow, says the result is probably a reflection of these great deals, making travel affordable to the main gateway but leaving out the additional cost to go further.

The good news is that there has been a 27 percent increase in business events travel to Hawai’i from New Zealand and although O’ahu gets the majority of the business, all four of the main islands have had business events over the last few years.

In fact, the bureau has found that once companies have had a taste of O’ahu they are prepared to look at the other islands in the future. Business events is an area that Hawaiian Tourism Oceania is looking to have more of a focus on, according to Hornblow.

Tweet
More in this category: « CINZ update attracts all types of animals Showcasing events at iconic Hopetoun Alpha »
back to top