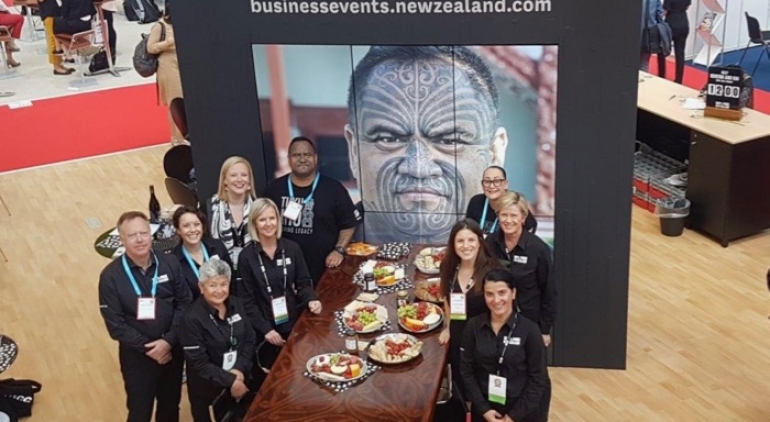 A striking, carved wooden table will be the cultural and conversational centrepiece for New Zealand’s largest-ever presence at AIME 2019 in Melbourne from 18 to 20 February.

CINZ Australia manager, Sharon Auld, says the 100% Pure New Zealand stand at this year’s AIME will be an impressive 135 square metre space – the largest stand in the 26 years New Zealand has been attending the event.

'With a team of 35 representatives from across New Zealand, we are excited to participate in the revamped AIME. New Zealand will be hard to miss in a prime position opposite the AIME Exchange. Our presence this year reflects the growth of New Zealand’s infrastructure, with many exciting new developments underway across the country,' she says.

Tourism New Zealand’s Kōrero and Kai table will be the stand’s central gathering place. Made from ancient reclaimed swamp kauri using traditional Māori techniques, it reflects New Zealand’s manaakitanga (warm welcome) and will be a place where people can share stories and hospitality.

Te Pae, Christchurch’s new riverside convention centre has also doubled its presence on the show floor in preparation for opening next year.

For the first time, Sudima Hotels will be exhibiting at AIME to showcase its rapid growth of properties throughout New Zealand, with new hotels in Auckland, Christchurch and Kaikoura. Business Events Waikato and Claudelands Conference and Exhibition Centre are also returning to the 100% Pure New Zealand stand in 2019 with new destination features to highlight.