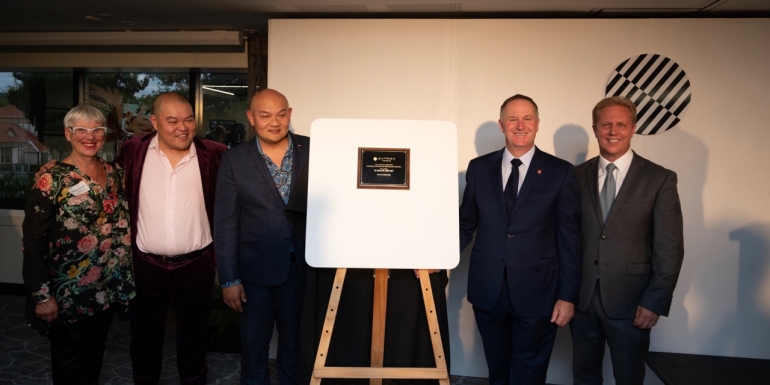 Rt. Hon Sir John Key officiated at the Grand Opening Ceremony, which was attended by over 100 guests including local council members, chief representatives from tourism and trade, local and regional media, and hospitality organisations.

The first international five-star hotel in the Bay of Plenty region, Pullman Rotorua is a dynamic and cosmopolitan hotel for the high-end domestic and international traveller on a trip to New Zealand’s popular tourism mecca.

Situated in the centre of the city, the hotel offers visitors the perfect base to explore the region’s geothermal attractions. Locals and visitors alike can start or finish the day with the very best tastes of New Zealand at the hotel’s modern brasserie, Barrel & Co Bar and Grill.

General manager Richard Bungeroth is thrilled with the response from the local community and domestic travellers since its soft opening in January.

“We were honoured to have Sir John Key with us to officiate our grand opening. We’ve received overwhelming support from the Rotorua community and have welcomed guests from all over New Zealand and the world since we opened our doors earlier this year.”

“Pullman Rotorua is perfectly suited for travellers, especially families, couples and business leaders looking for a world-class stay in one of the country’s most attractive tourist destinations. We hope to welcome many more visitors to New Zealand’s adventure capital,” says Bungeroth.

“The Bay of Plenty and Rotorua in particular have had a booming tourism economy for quite some time. It’s a privilege to officiate the grand opening of the region’s first five-star hotel.”

“The Pullman Rotorua will certainly be meeting a need at the top end of the market and will entice visitors looking for that luxury offering that wasn’t in the region previously,” says Sir John Key.

The 130-room hotel has panoramic views of the city and lake area and also features a vibrant bar, gym, unique executive lounge experience as well as conference facilities, and signature restaurant.

Barrel & Co Bar and Grill will deliver an entertaining dining experience centred around an intimate open kitchen and a focus on locally sourced produce, a premium grill selection and an impressive craft beer and local wine menu showcasing every growing wine region in New Zealand.

Tweet
More in this category: « Veterinarians flock to Aotea Centre Electric vehicles for guests at Crowne Plaza Auckland »
back to top