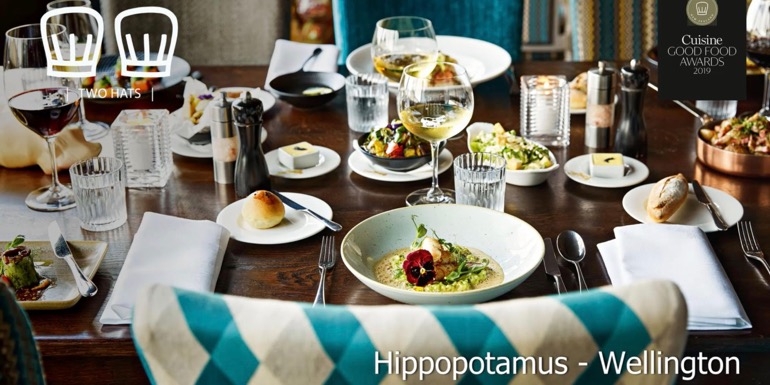 QT Wellington is delighted to announce that its signature French fine dining restaurant Hippopotamus has earned Two Hats in the Cuisine Good Food Awards.  After securing a coveted spot on Cuisine’s Top New Zealand Restaurants for 2019, Hippopotamus Restaurant was hatted for tallying a score of 17 – or “excellent: up there with the best” – by the industry experts behind the awards assessment team.

Each year, the Cuisine team curates a selection of the very best restaurants across the country and awards points based on current performance, which translate to hats. Hatted restaurants “are at the very top of their game, on par with a premium global dining standard”.

As a Two Hat winner, Hippopotamus is listed amongst the 58 acclaimed NZ restaurants that now don between one and three hats.

Hippopotamus Restaurant’s French-inspired menu features local and sustainably-sourced ingredients under the direction of executive chef Jiwon Do. 2019 marks Do’s first full year at the helm, returning to Hippopotamus in August 2018 after previously serving as senior sous chef for five years. Do brings his own unique flair to the restaurant, as a recipient of culinary awards from New Zealand and Korea and a fifth-generation hospitality professional.

Cuisine’s review praises Hippopotamus: “A quiet achiever serving some of the finest dining in Wellington, this boldly decorated restaurant throws in some frills that won’t fail to intrigue… Chef Jiwon Do experiments with an array of flavor combinations woven together to create extravagant and unexpected delights.”

Of the Cuisine Good Food Awards, Do says, “I’m incredibly proud to bring home two hats for Hippopotamus. It’s an honour for the restaurant to be recognised across New Zealand, as an iconic Wellington establishment. My goal is for my love of New Zealand – and our foodie capital city – to come across in my dishes, by using fresh ingredients that are ethically sourced from trusted local partners”.

Stand-out menu items at Hippopotamus this year included L’extraordinaire, a dessert made with Pāmu Deer Milk and Le Saumon, seared Ōra King salmon with pickled pikopiko among other seasonal ingredients. Chef Do also let his creativity shine with a special creation for the Wellington on a Plate festival’s Burger Wellington programme. The Bourgeois Burger High Tea featured Zelati’s cookie s’mores and a pork cheek slider from Woody’s Free Range Farm.

“Jiwon has expertly led Hippopotamus and our talented culinary team to reach this milestone. His curiosity for new ingredients combined with commitment to sustainability really shines through on the menu which is packed with hyper-local ingredients. He does all this without sacrificing entertainment for diners or the authentic French flair that earned Hippopotamus its status as a Wellington institution,” Solly says.