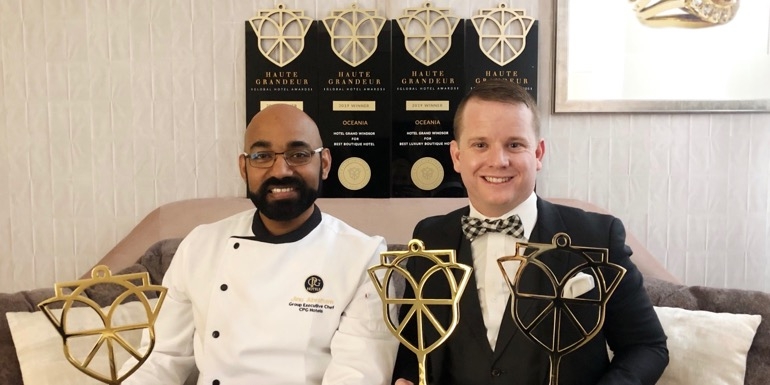 Jinu Abraham and Chris Dickinson with the awards

Auckland’s premier boutique accommodation property, Hotel Grand Windsor, has towered above the competition in the annual Haute Grandeur Awards, scooping the New Zealand record of seven Excellence Awards, amongst a field of 172 countries and 90 categories.

The Haute Grandeur Global Hotel Awards uses unbiased, independent results guaranteed by placing emphasis on quality feedback from guests, rather than votes by a panel of judges or general public, to honour the very highest achievements from across the global hotel industry. More than 400 Hotel Grand Windsor guests voted in the 2019 Awards.

Cooke's Restaurant and Bar at Hotel Grand Windsor won an Excellence Award for:

“The Haute Grandeur Global Awards concept is simply unrivalled,” said Haute Grandeur Founder and President, Marinique De Wet. “We recognise excellence through guest feedback so unbiased results are guaranteed through a fair and transparent process. This is the Haute Grandeur way, and sets us apart in the world of Awards initiatives.”

Christopher Dickinson, General Manager at Hotel Grand Windsor, said the entire team was thrilled to be recognised by the most influential critics of all, their guests, across so many categories.

“Amongst the many awards we have received, these are certainly our most prized accolades because of the true nature of the judging, by our guests,” said Mr Dickinson. “We strive to create the most memorable stay for each of our guests and it’s wonderful to know that our accommodation as well as our restaurant has been recognised at such a global level.”

Multi-award winning chef Jinu Abraham has been redefining the dining experience for the New Zealand hotel industry since 2008, and now holds the enviable title of Group Executive Chef for the prestigious CPG Hotels. Overseeing cuisine for seven properties around the country in the CPG Hotels portfolio, Jinu has been recognised locally and internationally for his passionate and innovative approach to creating memorable menus that span banquet to bespoke dishes, and he even oversaw catering for the All Blacks for nine years.

Jinu’s vision to see CPG Hotels as a leading hotel group in food and beverage is the motivation behind his thoughtful creation of each menu with careful research and experimentation using new produce and techniques.

An MGallery by Sofitel property, the original 1920’s Art Deco architecture and interior design within the Hotel Grand Windsor provided the aesthetic foundation for the extensive redevelopment, successfully transforming the property from a three-star to five-star hotel while still operating, over the course of 12 months, starting in 2016.

Hotel Grand Windsor boasts a bespoke range of rooms, from the Classic to Superior, as well as Luxury rooms and Junior Suites. Crowning the boutique accommodation on offer are the sumptuous ‘Duchess’ and ‘Windsor’ suites.

Cooke’s Restaurant & Bar pays homage to the eatery of the same name in the first Windsor House, with a special focus on using only the freshest local produce, carefully crafted with a strong focus on nourishing wholefoods, and a nod to the iconic dishes from the original restaurant which have been revamped with a modern take.

Conference facilities and Spa are set to be introduced to the Hotel in 2020.