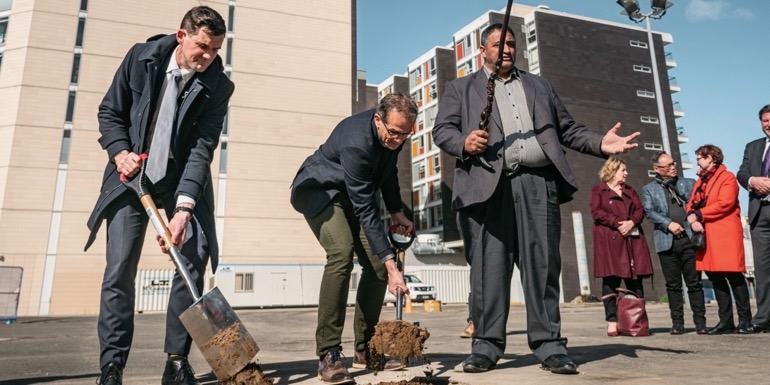 The ground has been broken for the Wellington Convention and Exhibition Centre, a first-of-its-kind building for the country which will lead the way for resilience and sustainability.

“This building will be New Zealand’s first venue that combines public space with a public exhibition gallery, cafes and a walkway on the ground floor that connects Cable and Wakefield streets,” he says.

“This striking building has been designed to cope with sea level rise. It is base isolated so it will cope with a major earthquake and can serve as an emergency centre afterwards.

“It will also be one of the greenest buildings in the country, with a Five-Star Green rating. As well as the economic benefits its construction and operation will bring, it will revitalise this part of the city and provide a crucial link between the waterfront and the Courtenay Precinct.”

Resource consent was granted last month, ground testing has been carried out and construction crews will commence enabling works shortly. Work is expected to be completed at the end of 2022.  Steel, facades, windows and mechanical plants will be sourced from local businesses.  WellingtonNZ General Manager David Perks says Wellington is missing out on convention business to other cities. It will also add to New Zealand’s convention centre offerings.

“The WCEC will grow tourism, develop and create new home for culture and support our people with connection and job opportunity. “It will protect and grow Wellington’s market share of the national and international business events market.”  Mr Perks says the WCEC is expected to contribute $156 million to the New Zealand economy (including $76m to the Wellington economy) and support 1520 jobs (including 864 in Wellington).

“But it’s not just about conventions. The exhibition space will be able to host international touring exhibitions such as Harry Potter, Star Wars, Marvel and Game of Thrones, which the country is currently missing out on.”

The WCEC will be the capital’s largest built infrastructure investment since the Wellington Regional Stadium was built two decades ago.