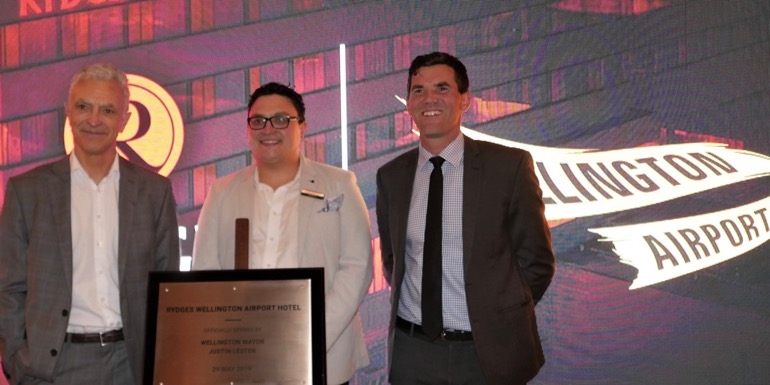 Rydges Wellington Airport Hotel was officially opened by Wellington mayor, Justin Lester, last night. More than 100 Wellington industry and community representatives attended to celebrate the first hotel in New Zealand to be fully connected and integrated with an airport terminal.

Wellington Airport ceo, Steve Sanderson, said the new hotel represented a milestone for New Zealand airports. He recalled that when first raising the concept for Wellington he was reminded of the number of failed business cases on record for airport hotels.'With our current 6.2 million passengers and 95,000 flights per year I feel the business case can now stand up.' Building a hotel within any airport was a complex process for project managers, he added, congratulating the 300 people who had been involved in various aspects of construction.

Safety was a paramount concern and Sanderson singled out the airport’s ‘Safety Wingman’ campaign, developed in collaboration with construction company Arrow, which won the safety excellence award at the NZ Institute of Building 2018.Wellington City Mayor, Justin Lester, thanked Rydges and Wellington Airport for the investment in the city. 'The emails I have received would tell me how many people have been crying out for a good hotel near the airport. Now we have this four star hotel and you couldn’t get it any closer to the airport.'

The new Rydges Wellington Airport hotel features 134 rooms, with complimentary Wifi and24-hour room service.  A conference centre offering six meeting rooms with capacity for up to 160 people will open later in the year.

Tweet
More in this category: « Half Way For Te Pae Christchurch Gold keys at the George »
back to top