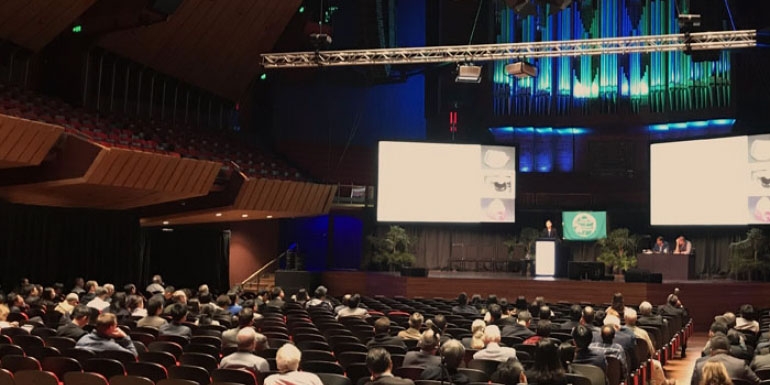 The reopening of the Christchurch Town Hall in February significantly bolstered the city’s capability to host large-scale business events.

The conference was first held in 1968 in the United States, and was held in New Zealand twice before coming to Christchurch in 2019 – in Rotorua in 1985 and Queenstown in 2007.  With an anticipated attendance of 250, organiers were pleased to welcome more than 400 delegates to the four-day conference. The event kicked off with meetings on Sunday 10 March, before attendees got stuck into scientific discussion.

'The feedback we’ve had suggests the conference was an outstanding success,' said Spencer Beasley, acclaimed paediatric surgeon and 2019 conference convenor. 'We attracted well over 400 of the most eminent paediatric surgeons from the Pacific rim countries– and beyond – to four days of an intensive scientific program.'

Attendees found the Town Hall a “stunning” venue, Beasley said. The event was held in the new auditorioum, “with it’s impressive design and wonderful acoustics”. 'On the final day, we ran a concurrent workshop on neonatal thoracoscopic surgery, one of the more challenging areas in paediatric surgery.'

'It was held at the new simulation centre at Christchurch Hospital, again giving us an opportunity to showcase Christchurch, its new facilities, and the quality of the work done here.'

Karena Finnie, ChristchurchNZ Head of Major and Business Events, said the conference marked a turning point for the central city. 'The Christchurch Town Hall was an ideal venue for such a gathering, and easily held the more than400 delegates who attended,' Finnie said.  'As more and more venues open in Christchurch, our city increases its capability to host large-scale business events, which is very exciting for the industry'.

The anticipated 2020 opening of Te Pae, the city’s new convention centre, is set to further strengthen this growth industry in Christchurch.

Chris Mintern, Vbase acting general manager, said it was an exciting time for Christchurch to once again be hosting events in the Christchurch Town Hall, a Vbase-managed venue.

'While Horncastle Arena and the Air Force Museum of New Zealand have provided valuable alternatives for conferences, attracting business events back into the heart of Christchurch is notonly positive for Vbase but for the city too,' Mintern said.

Tweet
More in this category: The Red Barn delights with Taste of Waikato »
back to top