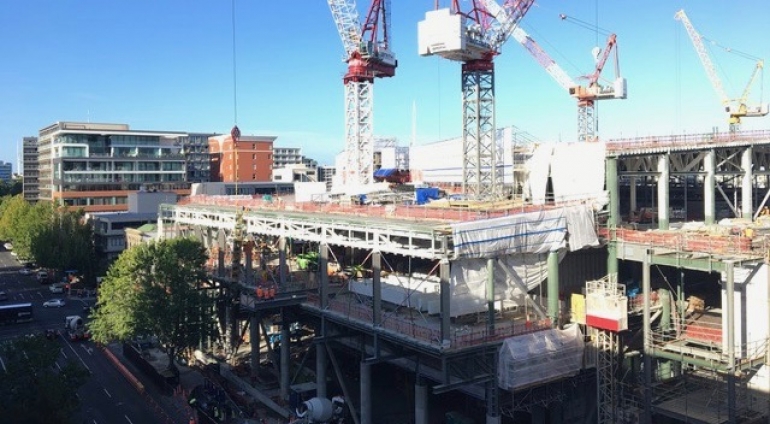 Construction of the New Zealand International Convention Centre (NZICC) has reached another milestone, with the installation of the first of the glass art work covering the exterior top of the building.

Works by two New Zealand artists, Sara Hughes and Peata Larkin will span a total of 5,760sqm once fully installed on the four external walls of the NZICC.

Artwork from local artist Sara Hughes began installation last week. First to be fitted will be 98 glass fins that will adorn the western and eastern exterior, followed by the southern side of the NZICC where another glass artwork feature with over 500 panels of varying size will wrap the top level of the structure.

The imagery uses 60 different colour tones and is inspired by Hughes’ upbringing in rural Northland near the Waipoua kauri forest.

'The artwork reflects the experience of walking through the New Zealand bush and looking up through a canopy of trees to see the light and colour of the forest,' says Hughes.

'It’s really exciting and moving for me personally to see this work lifted into place and on public display for the first time.'

Warren and Mahoney, who designed the NZICC in association with Moller Architects and Woods Bagot, say the highly collaborative design process has leveraged the NZICC’s original design brief to create a building with enduring civic presence and identity.

'In many ways we’ve been speaking ‘on behalf’ of the building over the last few years. That’s why it’s so exciting to see the building increasingly start to speak for itself, and the installation of the first of the Sara Hughes-designed fins will see a powerful and distinctive part of the project’s identity assert itself on the skyline. We’re looking forward to the first fins quickly weaving the larger veil of colour over these elevated and visible sections of the NZICC’s facade,' says Richard Archbold, project architect.

Over 500 panels of different sizes, shapes and colours will be installed into the building over the next six months. The panels are lifted in by mini crane or tower crane at an average of six to eight per day.

Callum Mallett, general manager NZICC, says the challenge of lifting something so large, heavy and delicate on a busy construction site is significant.

'Some of these glass panels are up to nine metres high and weigh as much as 1.3 tonnes, and they have very specific placements, so the team on site have a delicate and challenging job ahead of them.'

Once Hughes’ glass installation is completed, work will begin on the installation of Larkin’s terracotta wall. The105m-long tile wall will span from Hobson Street to Nelson Street through the future laneway of the NZICC, and will wrap back into the building.

Approximately 13,500 terracotta tiles in eight different colours will form a complementary relationship with the glass artwork, softening and adding movement and life to what would have been a straight plain wall.