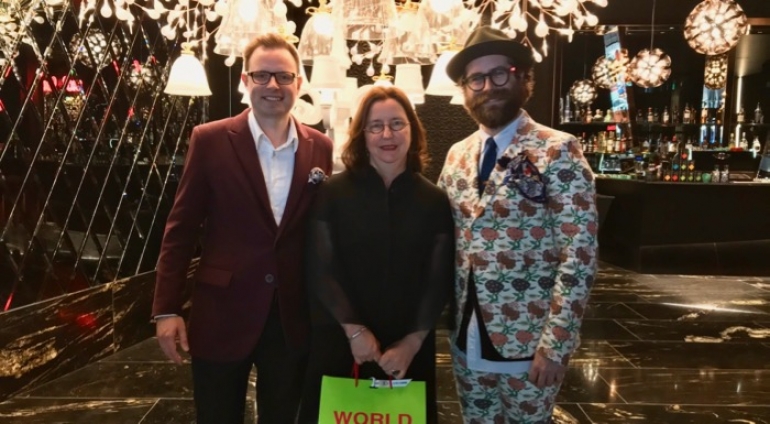 SO you think you know luxury

Redefining Auckland’s perception of luxury is a challenge being embraced with open arms by newly opened SO/ Auckland.

The hotel has been hosting a number of showcase events this week to educate the industry on what it hopes to achieve.

With a location at 67 Customs Street, the hotel has kickstarted a revitalisation and beautification of the area that actually utilises Auckland’s harbour as an asset.

Benny Castles, of WORLD Fashion who are the design partners with the hotel, says New Zealand has a very interesting engagement with luxury.

‘We are in the phase of actually defining what that means and how that can express itself, and I think where SO and WORLD have synergy is that we talk about luxury with personality.

‘Luxury isn’t about sitting and being quiet, it’s about engaging your personality and your individuality, and that’s where I think in New Zealand we can enjoy luxury – we can be in jandals and on a beach as well as in this Michelin star environment with all of its character and beautiful food.’

Castles says when people walk into a hotel they want to step into somewhere and feel both the beginning of an experience and leaving something behind.

‘But even more importantly and I think what SO offers and what’s exciting for us as passionate Aucklanders is that there’s an opportunity to do that for locals as well.

‘I think a lot of hotels just by their nature in Auckland do not have the ability to explore actually entertaining the locals.

‘We feel as a customer-facing business it’s our job to give over that opportunity and experience for Aucklanders and celebrate Auckland for all of these great opportunities, and if we don’t encourage Aucklanders to use things like this they won’t exist.

‘It’s fun for us to talk about dropping out of these high-rise buildings, stepping into the SO/ Auckland lobby and that busy cluster dust of customs and gore of Britomart gets locked off behind you and you step into this really fun dress up oasis of sophistication and maturity but also of fun.’

Stephen Gould, SO/ Auckland general manager, says luxury doesn’t have to be stiff, it should be about having fun.

‘Most people want to enjoy themselves while they’re spending money. They want to take something away other than just a physical item and hopefully we can bring this approach to Auckland.’

Gould says SO/ Auckland is looking to use this approach to change up the meeting game in the city with events held on the hotel’s meeting floor.

The space is in an original gold vault and has been designed to keep energy levels high with bold décor including molten lava patterned floors.

Gould proposes active breakout events for between meeting sessions to keep up energy levels, such as Italian Job heists or gold panning to keep with the hotel’s theme.

WORLD designers can also be pulled in for interactive breakout sessions.

‘There’s already some great venues in Auckland but nobody’s bringing this animation, energy and way of thinking to what would normally be seen as a relatively routine process,’ says Gould.

SO/ Auckland’s meeting floor can take 250 guests and is divisible by four. It will open on 1 January 2019.