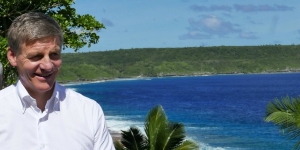 Niue is stepping up to join the meetings and incentives market, with the opening of the Matavai Conference Centre Niue and new, deluxe guest accommodation at the Scenic Matavai Resort last week.

The new conference centre was the focus of huge media attention as it was jointly opened by New Zealand Prime Minister, Bill English, and the Premier of Niue, Sir Toke Talagi.

The Prime Minister, along with New Zealand MPs and business leaders, was visiting Niue as part of a high-level Pacific Mission, which travelled across several Pacific nations last week. He admitted initial scepticism when, as finance minister in 2009, the then Foreign Minister Murray McCully told him Niue needed New Zealand’s help with significant investment in its tourism facilities.