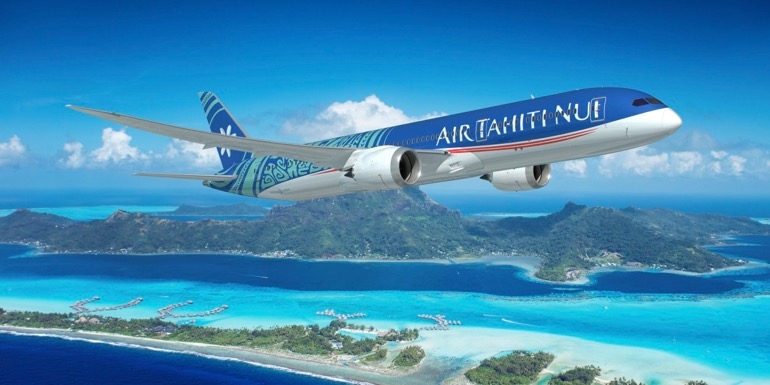 Air Tahiti Nui says “nānā” to its last Airbus and “Ia Orana” to an all ‘Tahitian Dreamliner’ fleet. General manager pacific, Daniel Eggenberger says, “This ambitious fleet renewal programme makes our fleet the youngest in the world, with an average aircraft age of just a few months.”

With the Airbus now phased out from the entire Air Tahiti Nui fleet, Eggenberger says with the comfort and design of the 787 Dreamliner will deliver around 20% fuel efficiency which he says “Significantly reduces the airline’s carbon footprint.”  With the new Tahitian Dreamliner comes new livery and a design concept that encapsulates the spirit of French Polynesia in an authentic, yet refreshingly contemporary way.

New crew uniforms featuring the bright colours cherished by famed painter Gauguin have been added to the Purotu and Marmarau dresses, that are favoured by Polynesian women. Bright and exotic hues of red, yellow, blue and even rose motifs that were hallmarks of the painter have been worked into the design, making it a real representation of French Polynesia.

The airline’s fleet and inflight enhancements are accompanied by a revamp of its Tahitian headquarters as it quite literally flies into a more modern age that has a strong environmental mandate as well as celebrating its French Polynesian roots.

Eggenberger remarks that Air Tahiti Nui’s future is looking bright with its new offering that will also reduce travel time on the Auckland – Papeete route by up to half-an-hour and offer customers what he describes as the “Perfect entrée to their French Polynesian sejour.”

Air Tahiti Nui can land you in the South Pacific paradise of Tahiti in under 5 hours from Auckland and offers three services a week from Auckland to Papeete with additional codeshare flights taking total capacity to five times a week.

Tweet
More in this category: « Vanuatu answers the call with a new vision Pacific Resort Group - Wins big at World Travel Awards 2019 »
back to top