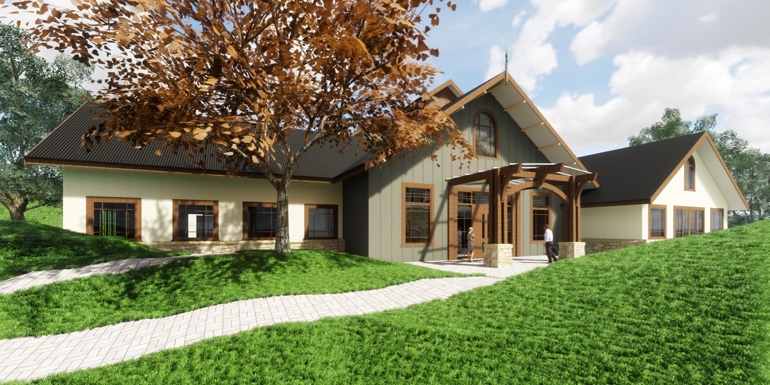 Hobbiton™ Movie Set is on its way to completing its latest development set to open before the end of 2019. The structure, or ‘Hobbiton Hub’ as it is referred to, is an architecturally designed building situated at the top of the visitor carpark at The Shires Rest™. The 1200m2 building will bring all of the business functions under one big roof for the first time, including administration, sales and marketing, accounts, operations and reservations.

The site will also feature state-of-the-art facilities ideal for hosting small corporate events and conferences, nestled in the rolling green hills of the Waikato. Two rooms will be on offer, aptly named the Romney Room and the Angus Room, after the two varieties of livestock the 1250 acre Alexander farm is home to.

Clients can choose to utilize one or both of the rooms which can be combined to host up to 100 delegates theatre style, with retractable sound-proof wall through the centre for flexible use of the space.

A key point of difference for these new business events facilities to the Waikato is of course it’s access and proximity to Hobbiton’s evening function spaces on the Movie Set. Imagine an event that begins and ends in the rolling green hills of the mighty Waikato, with conference facilities overlooking the iconic landscape of the Shire. Once the business side is taken care of, guests can embark on their own Middle-earth adventure with a guided tour of Hobbiton Movie Set, followed by and canapes and a banquet feast in The Green Dragon Inn. Packages will be available combining day delegate rates in the Hobbiton Hub, with evening events on the Movie Set.

The building has been designed to complement the rural surrounds, featuring natural timbers and colours. The look and feel of the project is being overseen by Brian Massey, who, as Art Director of Hobbiton during The Hobbit Trilogy, and Project Manager for many Hobbiton Movie Set special projects since, is uniquely qualified to oversee the job. Architectural Design companies Archaus and TILT Architecture in Wellington, along with Matamata companies Garland Engineering Services, Darren Roa Builders, Electrico Ltd, Van Dam Plumbing, and a range of other local suppliers and companies have been working on the project.

The Hobbiton Hub is expected to be completed in October 2019 and will not disrupt any tour operations or functions throughout the build.